Since picking it up at Salute in April, I have had a guilty pleasure lurking on my painting table, picked up and put down between commissions and Space Marines – (another) Big Boris Mk III!

I am most definitely a Big Boris Addict as he is so much fun to paint. He has a really great face and lots of flesh areas to practise the art of painting skin tones (which is most definitely an art rather than a 2+2=4 science).

This is the second 10th Anniversary Boris that I have painted – my theme for this one is contrast… I am trying to really work with the light-dark contrast as well as cool-warm and colour contrasts to make a miniature which could be predominantly one colour much more visually exciting. 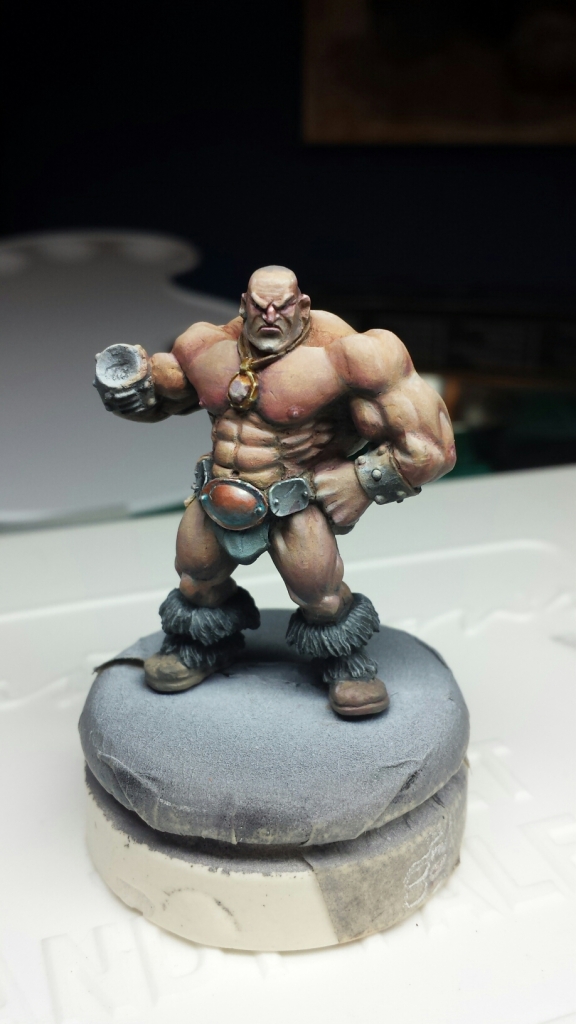 I have tried to create a gradient from top to bottom light-dark and also warm-cool, but will also be paying a close attention to my colour choices – his axe is going to be a cold blue-grey, his cod piece will be teal, and his stubble is going to get more of a grey-green applied. This should hopefully create an ‘enhanced’ realism without going totally OTT with the colours.

There is still a lot of work to do to really try and push myself, but it has been a lot of fun so far, and everything that I am learning will be going into the proyect that I have planned for Salute 2015.

As this is a bit of fun between other projects, it has taken a while so far, and is likely to take a while longer, but with the Heresy Kickstarter ‘Return of the Monsters’ in it’s last week, I thought I’d share 🙂